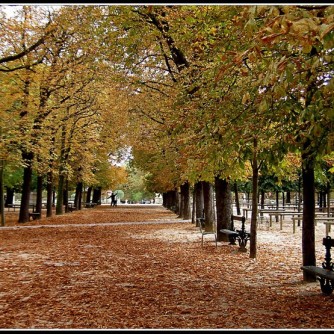 #4 – PARIS, ITS NEIGHBORHOODS AND ITS TOBACCONISTS

Then I would attach a dog on a leash outside
Add a touch of sunlight
And a scooter roaring by.

Adjoining would be a café
With cups clicking on a zinc counter
An Expresso machine hissing
And people behind glass windows
Looking good in cigarette smoke.

Outside a breeze would shake the chestnut leaves
On which tree-trunk initials would be engraved
Now undecipherable.

Someone would be buying a lottery ticket
And a newspaper
At the Tabac counter
With a little kid on tiptoes
Staring at chewing-gum packets
Next to advertisements
For ice-cream on the glass partition on the right
And on the left.

They would reflect the summer light
All those glass partitions
As well as the wrought-iron work
Of the metro station close-by
At the corner of the street.

A Gitane and a Gauloise
Would be seen dancing Flamenco
On blue boxes in twists of smoke
On their way to the nearest Prisunic.

And now the smell would turn vanilla
Because a crepe stand set up shop on the side
Next to the glass partition
So I would offer you a crêpe: banana-Nutella

No wait… scratch that out
It would be a roasted chestnut barrel,
That would show up instead, on the left
And it would smell of wood and smoke.

I would buy two paper cones: one for you, one for me
And a lottery ticket as well
And then we would turn around
To face the Luxembourg garden
(for a crêpe, it would have been the banks of the Seine,
or Montparnasse).

I would adjust my scarf around my neck,
You your sweater
Against the Autumn chill.
You would blow on your chestnuts
And we would step on the dead leaves
and scatter a few sparrows, while we walk away.

I wrote the guiding list a while ago as a way of giving myself a structure, a theme on which to build on. It doesn’t mean that I always think about France or that I sorely miss all the aspects depicted. I do and I don’t.
They act more like a theme I am embroidering on. Like the Goldberg variations. Or the flesh on a skeleton. Or the cotton candy on a stick.
Well this week I am not particularly inspired by the topic I gave myself. Inspiration or sudden interests don’t follow a list, right? Also, I started with the most inspiring items, which leaves me now a little bit stalled, trying to wring the juice out of what I had first thought. That’s not a bad exercise. And I am no quitter, so I will take on the challenge and get to work.
What is the alternative? Not creating? That’s certainly not me.
I also decided that as I am approaching the end of the list, i.e. the final countdown, I will stick with the original order.
In the meantime, without further ado, here it is: #4 – Paris, Its Quarters and Its Tobacconists.

What on earth could I add on this subject that has not already been said? Although I am pretty vague, there must be a gazillion poems and songs and books written. What is my grain of salt?
Let’s see.

2 thoughts on “﻿#4 – PARIS, ITS NEIGHBORHOODS AND ITS TOBACCONISTS”

This is a text widget. The Text Widget allows you to add text or HTML to your sidebar. You can use a text widget to display text, links, images, HTML, or a combination of these. Edit them in the Widget section of the Customizer.
Loading Comments...
%d bloggers like this: