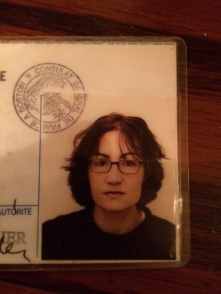 Rummaging through my wallet
While waiting for our meals to arrive
I fished out three IDs
On forgotten official documents.

Without having dropped Acid,
I saw, like Richard Alpert did
Some of my past Identities
Float in front of my bemused eyes
One by one.

Hi, dewy-skin doe-eyed kid with the caterpillar eyebrows!
I remember the morning in Montpellier, France when
You pedaled down in the heat to the mall
And incidentally how lightning reflected on the ocean out there
Some nights turned the world white like a cosmic flash.

Hello young woman with the little pinched smile,
I remember well the day you tried on
That business suit, near Gare Saint Lazare
Where you found the Photomaton that so skillfully captured
The sheepish look.

And there you are again – looks like you mean business
At the campus Police station for this memorable mugshot
The day students were moving in
At the college where you taught French.

And how beautiful to know that
The “I” who played those lovely roles
Tragedy, comedy, happy endings and all
May still have many more in store
New sets, co-stars and stories

Now in the next snapshots of this life
Among other things (such as love and laughter)
“I” plan to conjure up matching eyebrows
And to do something with the hair.

I subscribe to the idea that “We are not human beings having a spiritual experience. We are spiritual beings having a human experience.” (This quote has been disputably attributed to Pierre Teilhard de Chardin). Also this was before the selfie era, which did so much for the self-esteem of our daughters’ generation.

This is a text widget. The Text Widget allows you to add text or HTML to your sidebar. You can use a text widget to display text, links, images, HTML, or a combination of these. Edit them in the Widget section of the Customizer.
%d bloggers like this: